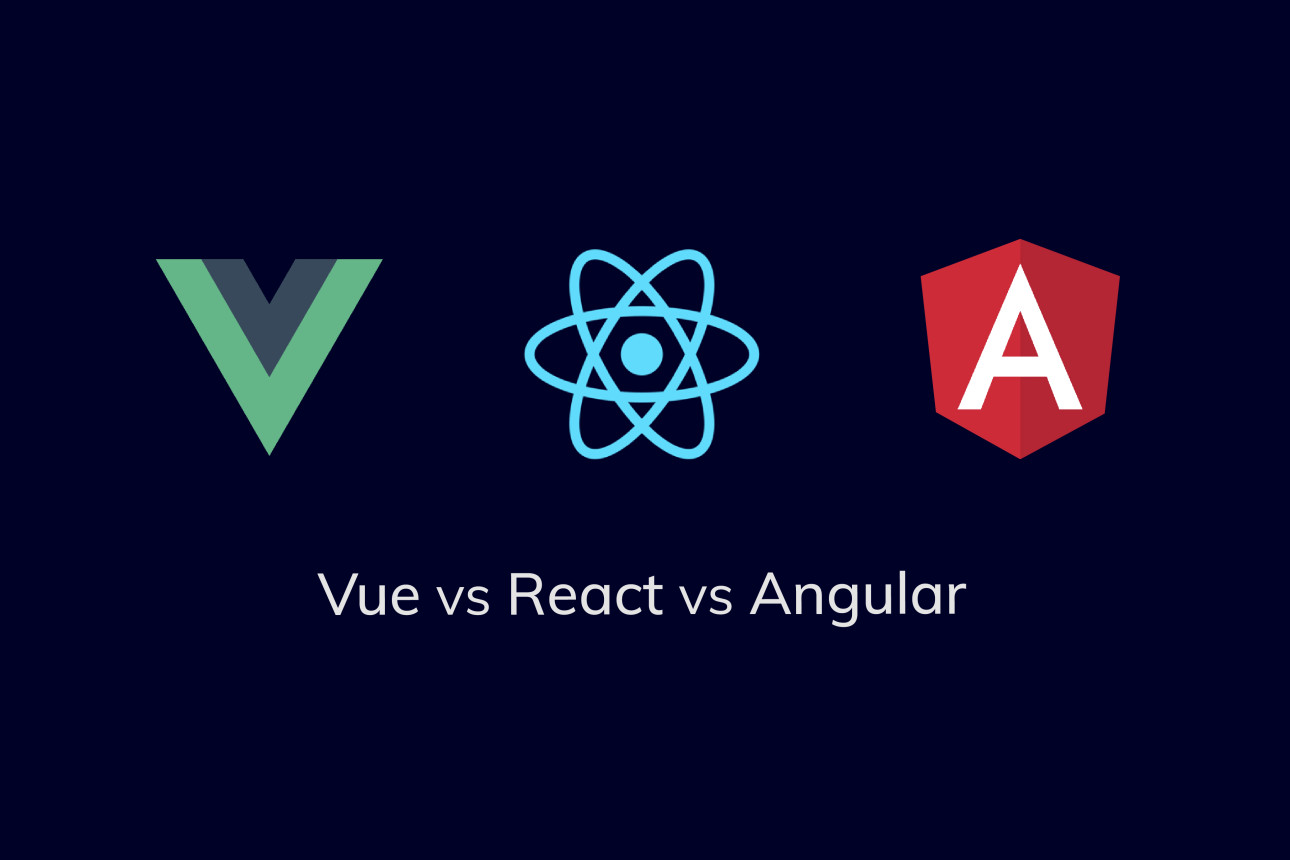 This blog is a broad-gauge comparison of three most popular JavaScript frameworks: Vue vs React vs Angular, and in case you’re a developer in the making or currently thinking of launching your own project using one of these popular frameworks, we hope it will be helpful to pick the right solution for you.

Since recently, there were two major players on the front-end arena: Google-released Angular and React — a JavaScript library developed by Facebook. Though, in 2018 one more strong player entered the competition showing the ambitions to be recognized as the most favorable of JavaScript frameworks — Vue js.

Vue vs React vs Angular

Before getting deeper into the general comparison of these popular frameworks, let’s have a look at their origin.

A brief history of Angular, React and Vue

A Google employee, Misko Hevery, was working on a side project aimed at simplifying the process of building web applications. The solution he found out was released in 2010 as an open-source project under the name AngularJS and came into active usage by some big brands.

Several years after, new advancements in JavaScript emerged, and the team was forced to rewrite AngularJS from scratch as based on TypeScript. The framework name dropped “JS” to omit the confusion. The updates take place twice a year and the last one — Angular 9 was released on February 6, 2020.

An unchanged leader among the most popular JavaScript frameworks, React was developed by Facebook to meet the needs of its products, and successfully presented and open-sourced to the tech audience in 2013. The elaboration of React takes roots from its early prototype created by Jordan Walke — “Fax.js”, first deployed in 2011 in Facebook’s News Feed. The latest version 16.13.0 was released on February 26, 2020.

The former Google employee Evan You after years of working with Angular decided to create a lightweight framework that would contain the best features of the aforementioned. An open-source framework Vue.js was released in February 2014 and since then is gaining extreme popularity. The latest version 2.6 Macross was released on February 4, 2019.

Angular vs React popularity is the opposition as old as the hills. Both of them are capable, up-to-date, and extensively used JavaScript frameworks that faced a significant change: their “duel” turned into a “truel” — Angular vs React popularity vs Vue.js popularity. We’ll have a look at four main measures to find out the most popular one: NPM trends, Stack Overflow Survey, GitHub stars, and open job offerings. 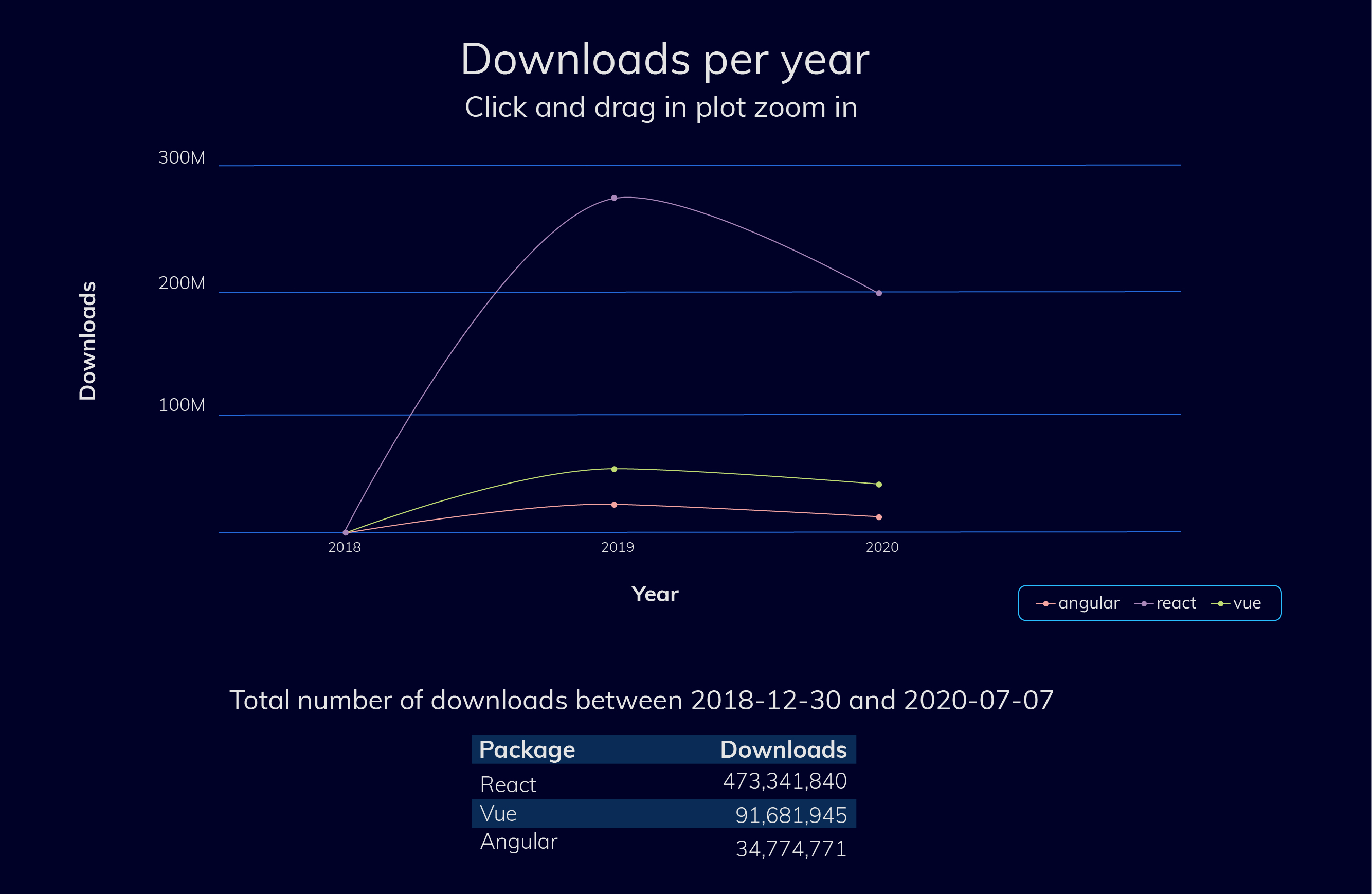 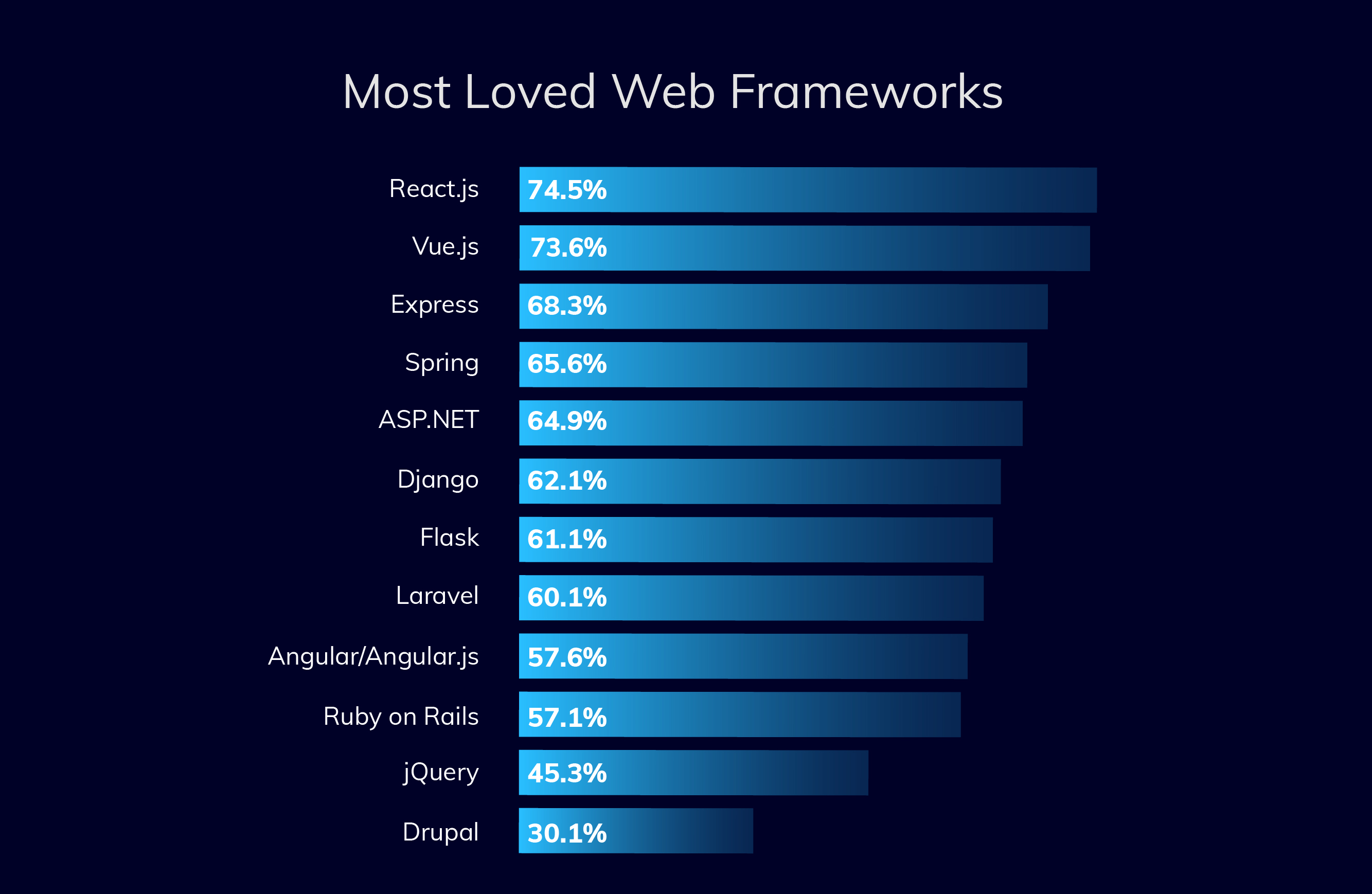 Therefore, we can undoubtedly claim that React is a winner in terms of finding a job and its long-lasting popularity among the developers. Though, we can also witness Vue.js vs React opposition getting intensified as to Vue.js community adherence. Angular is also keeping its stable middle position getting positive feedback from both: developers and employers.

The performance of the framework is determined by the most valuable parts — its components. Their workflow is related to the way in which it receives the input data, and the way it responds to that data.

Components of Angular are named directives. They are markers on DOM elements, which are tracked by Angular. Angular separates the UI parts of components as attributes of HTML tags and their behavior in the form of JavaScript code.

Contrary to Angular, React combines the UI and components behavior. To put it simply, the same part of the code is responsible for UI element creation and command of its behavior.

In Vue.js UI and behavior are a part of the components. The framework is also very customizable which allows combining UI and components behavior within a script.

Vue vs React vs Angular performance and framework size

Angular uses a real DOM, therefore it’s best suited for the single-page-applications where content is updated from time to time. It makes the process of updating much slower and in case of losing the flow, it will take a lot of time to find out the issue. Thankfully to the two-way data binding process, all the changes made in the Model are replicated into the views in a secure and efficient way. Due to the wide range of features available, the application is much heavier (approximately 500KB) in comparison to Vue and React that slows down the performance a little.

Contrary to Angular, React uses a virtual DOM that enhances the performance of all-sizes applications that need regular content updates. Single-direction data allows better control over the project. The disadvantage might be the need of developers to constantly upgrade their skills as to the constantly evolving nature of React. As React doesn’t provide a wide range of libraries, its size is much smaller than the size of Angular (approximately 100KB).

Vue also uses a virtual DOM, so the changes within a project are made without affecting the DOM properly. Vue possesses the smallest size of the three (approximately 80KB ) which significantly speeds up its performance.

The simplicity of the process of mastering a new framework matters a lot if one is considering learning it or training someone. So, which of them is the most learning-friendly?

Vue.js is probably the easiest to learn. And it’s dictated by two major reasons:

Though, the learning curve of Angular is considered to be much steeper than of React. It’s a complex framework that is constantly developed and offers multiple options to solve a single problem.

React also requires constant learning as it’s frequently updated but learning it comes much easier with tutorial for beginners and basic JavaScript knowledge. The main difficulty is the Redux library.

Vue, Angular and React use cases

Being developed by Google, it’s actively used in its AdWords applications for maximizing the performance. Among other famous web resources that utilize Angular, we can name the Guardian, Lego, Nike, PayPal, and Weather.com.

Initially designed for Facebook, React is still actively used by the company for creating a variety of its products. Twitter, Instagram, Whatsapp, and WordPress also embrace this framework.

Unlike Angular and React, Vue doesn’t have powerful patrons to implement it in each of its products. Though thankfully to its flexibility, it has gained popularity among such popular brands: 9Gag, Nintendo, GitLab, and Grammarly.

Vue vs React vs Angular — a comparative table 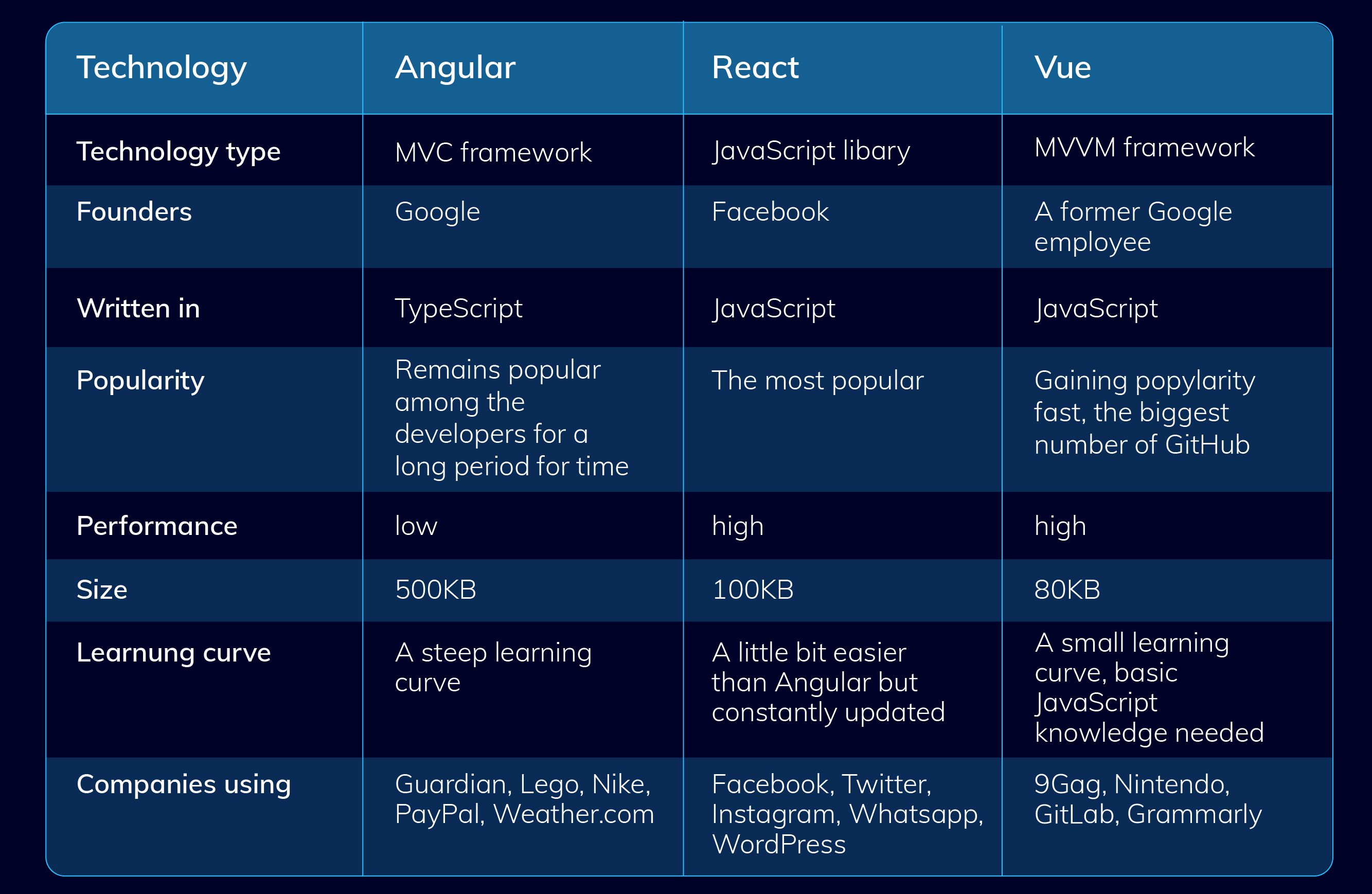 We hope the comparison was useful for you and will be glad if you share your opinion about Angular, React, and Vue opposition. By the way, if you have any questions or want to receive more information on this topic, drop us a line, and we’ll help you to choose perfect technology for your startup.