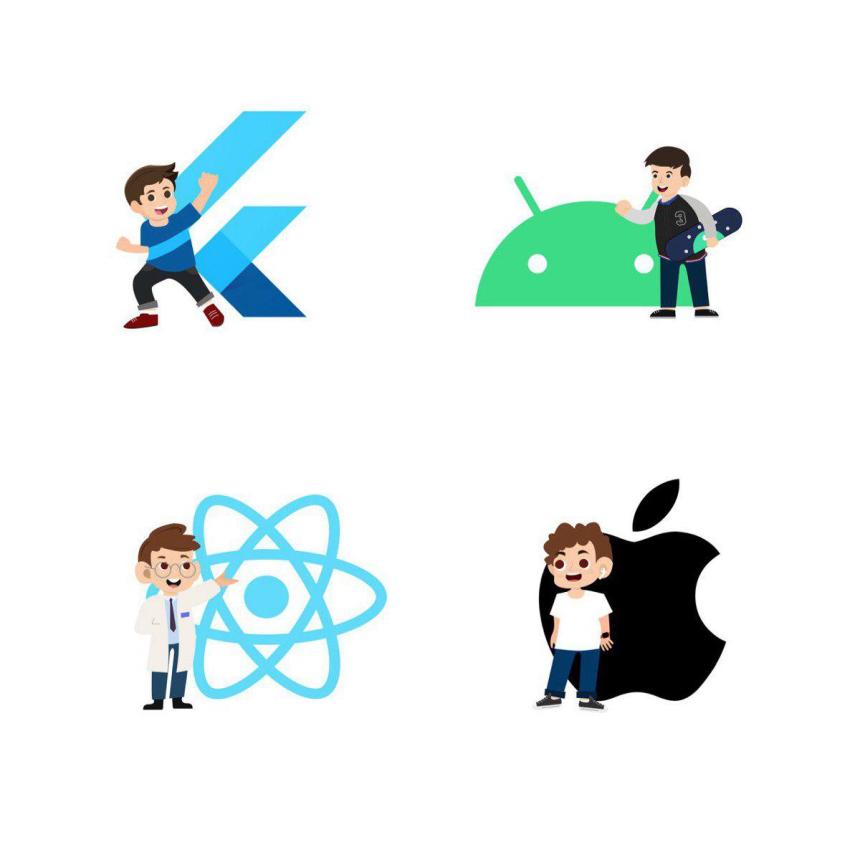 The story behind the research.

inVerita and its mobile development team continuously dig into the performance of cross-platform mobile solutions available on the market, that’s how Flutter vs React Native vs Native Part I emerged. Yes, it was quite controversial as one can state we weren’t using React Native to perform multiple calculations daily — that might be the case — but in this case, CPU heavy tasks are better performed by Flutter or native apps.

That’s why in this article we decided to research the performance of UI which has a much bigger impact on a daily user of mobile apps.

Measuring UI performance is complex and it requires an engineer to implement the same functionality in the same way across every platform. We went with a GameBench as a global testing tool to leave no doubts and make sure we stay objective (it doesn’t change the fact that we truly love Flutter in most aspects:) ). GameBench has a lot of space for improvements, but we managed to put every app into a single testing environment which was our goal.

Source code is open so please experiment and share your thoughts with us if you wish. UI animations mostly use different tools across different platforms so we narrowed everything to libraries supported by every platform (but one case) or at least we did everything we could to accomplish that. Test results can be different and depend on your approaches to the implementation, we believe that you, as a potentially true expert of specific technology can push your specific set of tools to the limits where it outperforms our numbers and we are happy if you do.

Now let's have a look at the cases.

We implemented the same UI on Android and iOS with the use of Native, React Native, and Flutter. We also automated scroll velocity with the use of RecyclerView.SmoothScroller on Android. On iOS and React Native we used an approach with timer and programmatically scrolling to position. On Flutter, we used ScrollController to smoothly scroll over the list. In each case, we had 1000 items in the list view and the same scrolling time to reach the last list element. In each of these cases, we used image caching with different libs per platform. More details could be revealed in the source code.

GPU tests results are not supported by the benchmark (unfortunately, with the devices we have, and we have many:)) ) 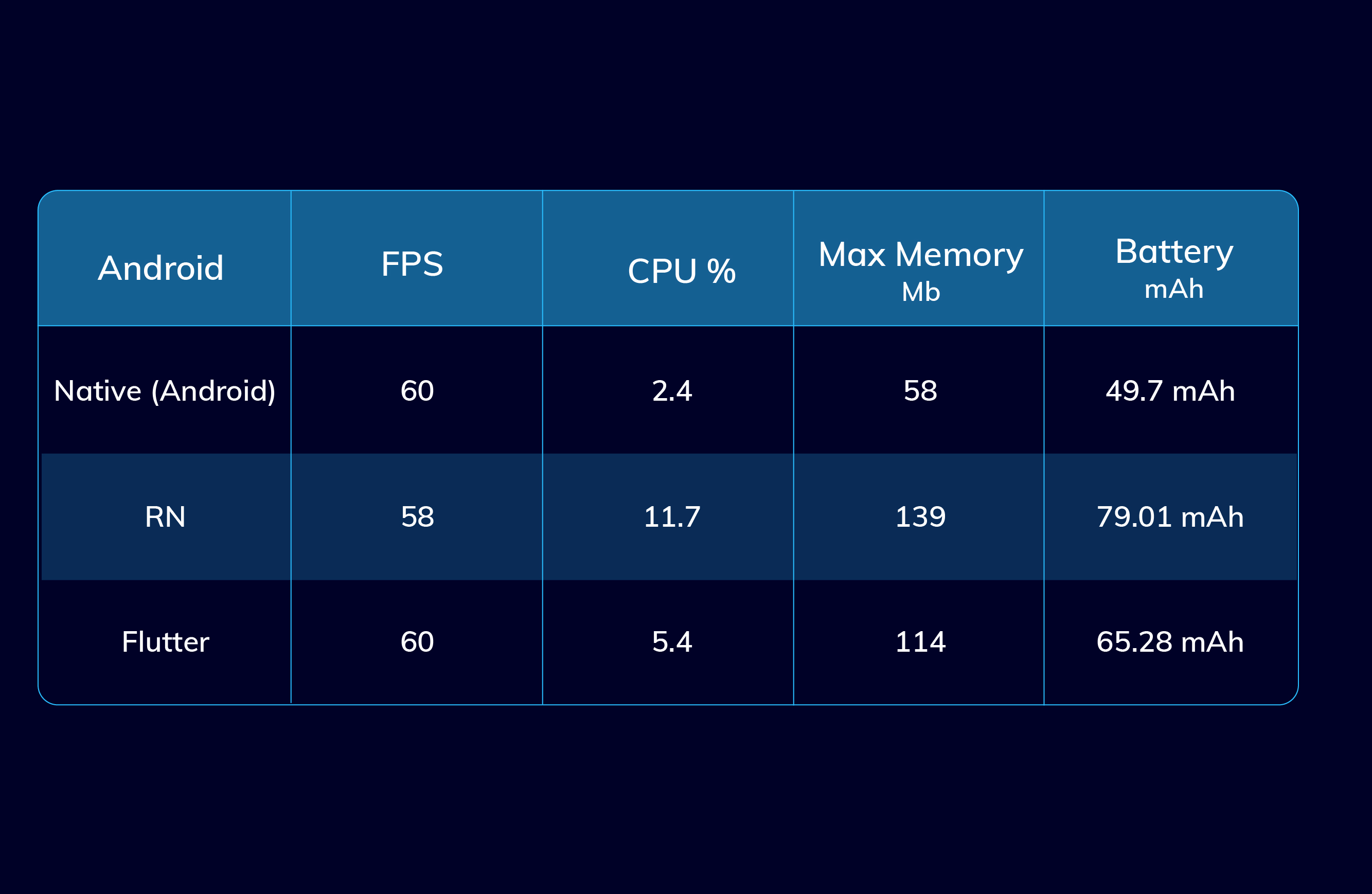 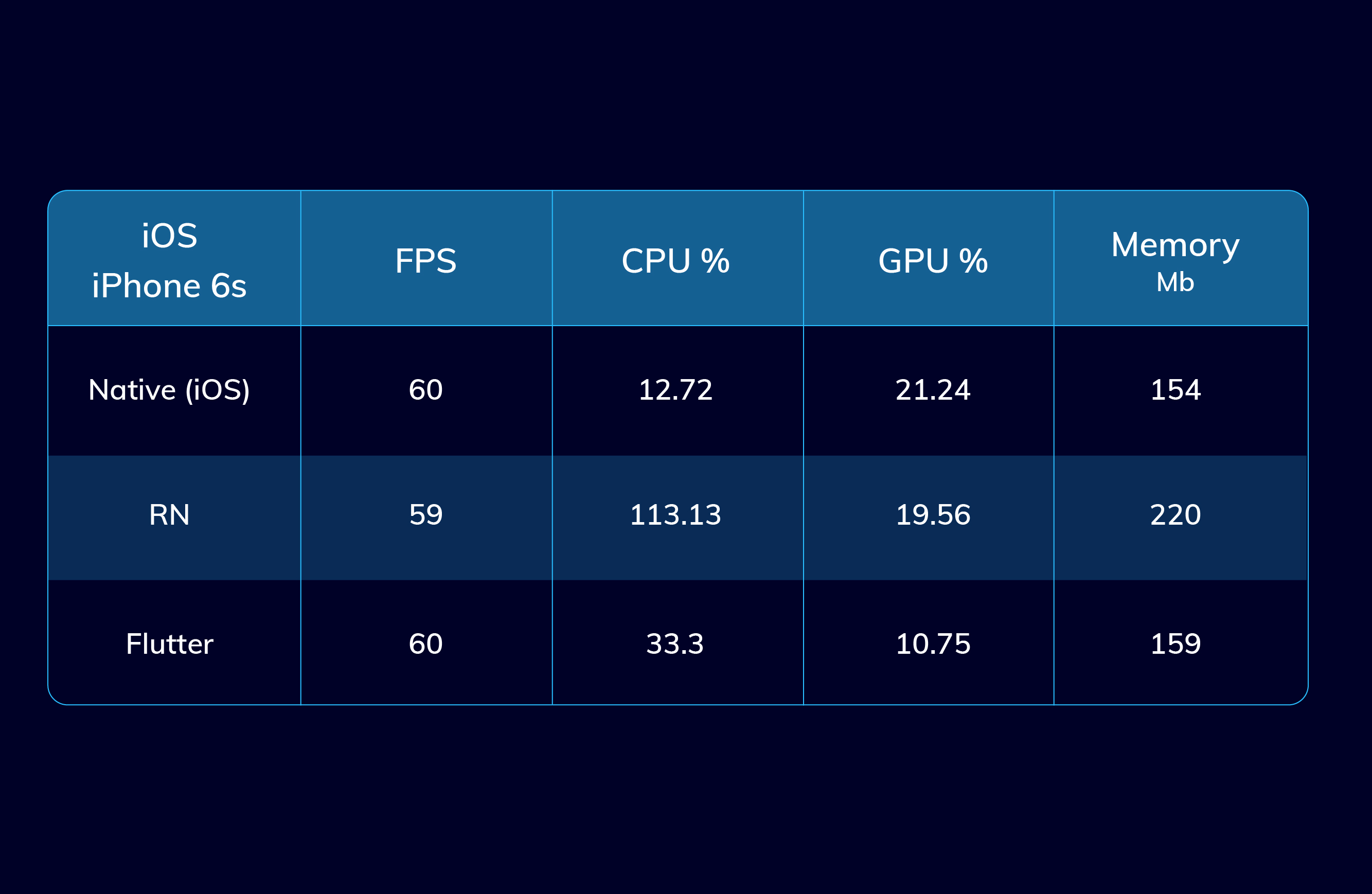 Nowadays most phones running on Android and iOS have powerful hardware. In most cases using usual business apps, no fps drops could be noticed. That's why we decided to do some tests with heavy animations. Heavy enough to get fps drops. We used vector animations animated with Lottie on Android, iOS, React Native, and adopted the same animations to use with Flare on Flutter.

Testing animation with Lottie for Android, iOS, React Native, and Flare for Flutter. 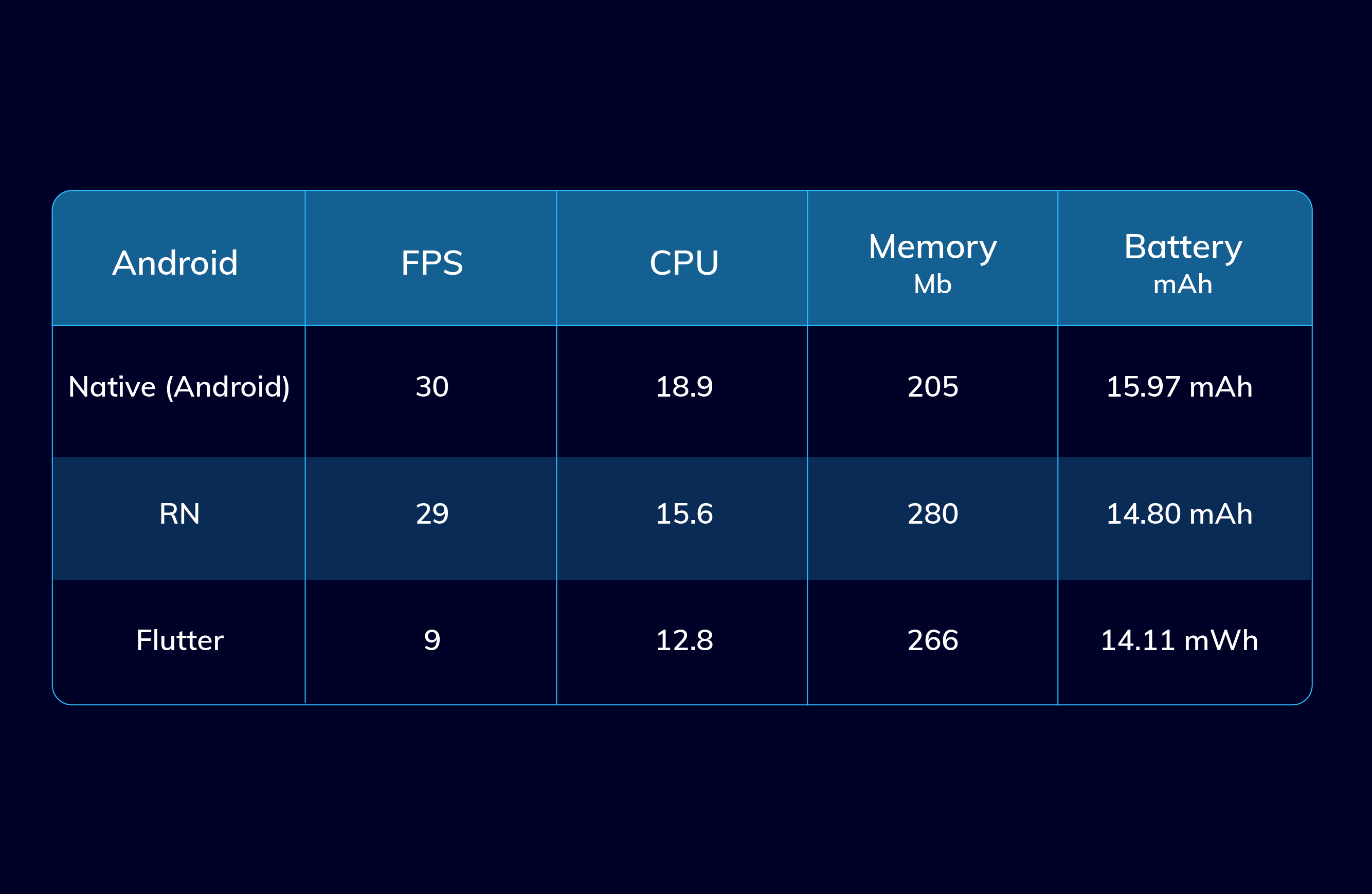 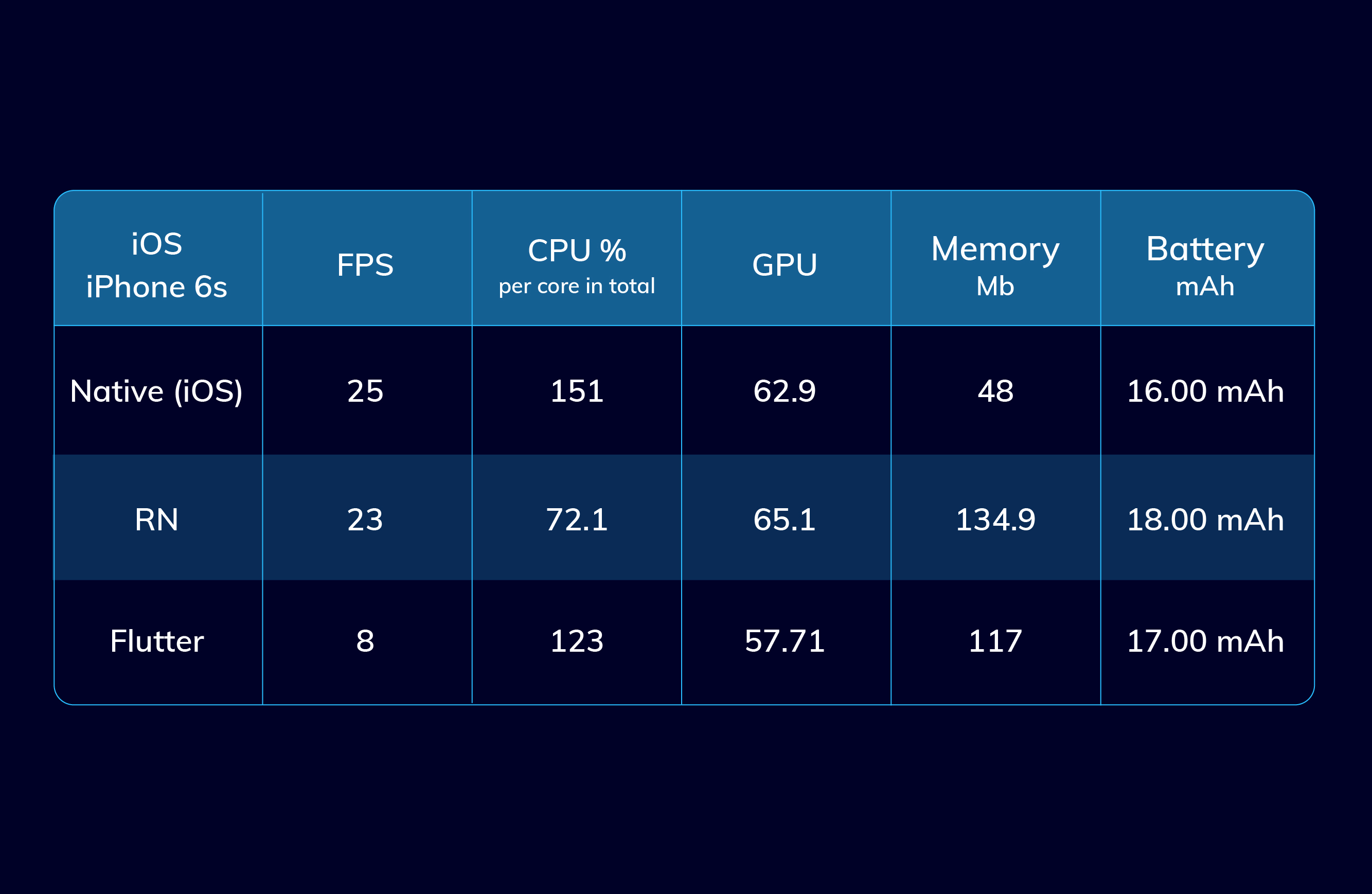 We discovered that removing one specific animation from the grid increases FPS up to 40% on Flutter. We suppose Flare is heavier and not optimized for this kind of task that’s why Flutter got such an FPS drop.

Take a note: we used a different library for this case with Flutter which is much heavier compared to those we used for other platforms and it might be the reason for fps drops.

In this test, we compared performance while animating 200 images. Scale rotating and fade animations are executed at the same time. 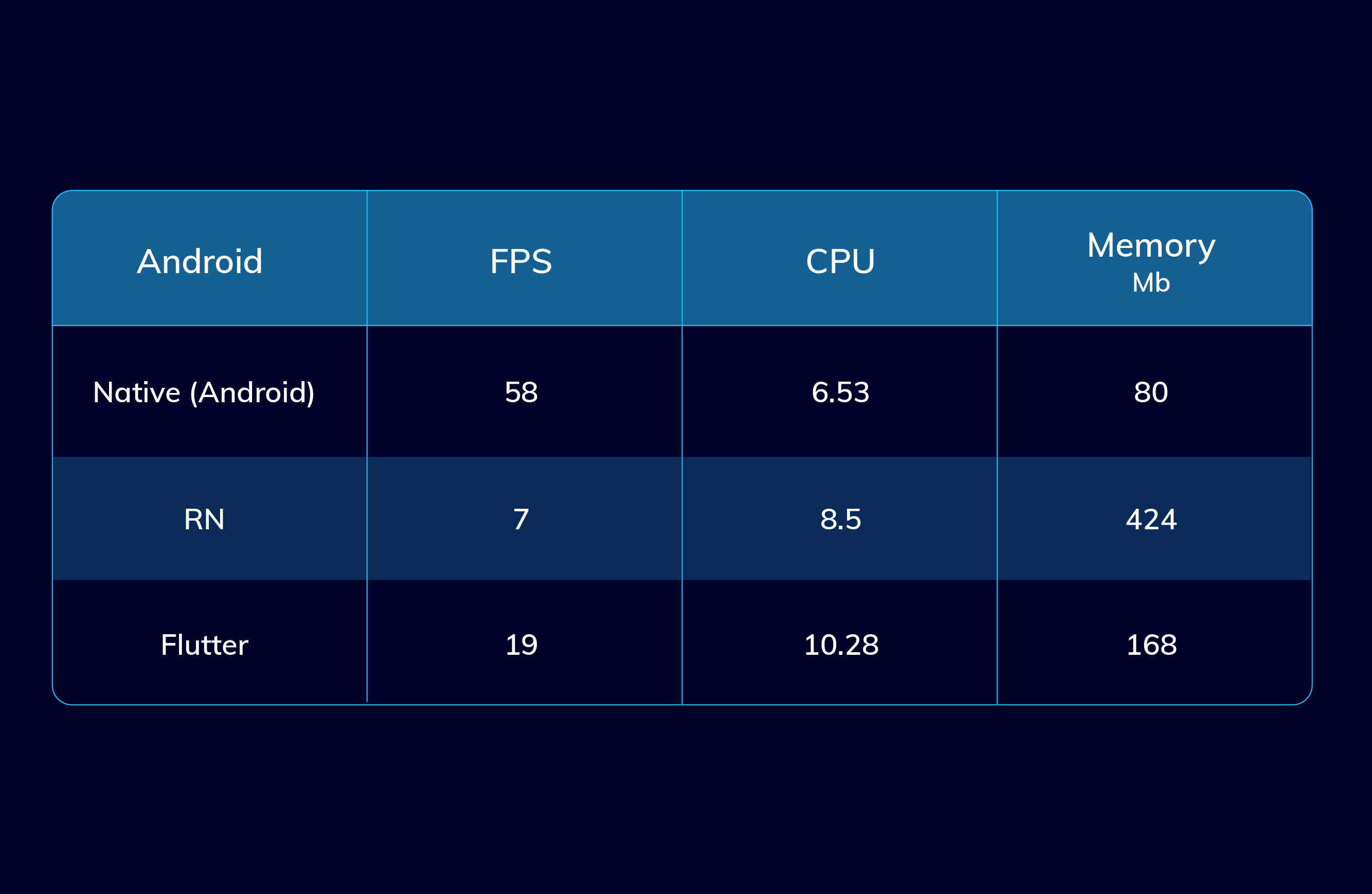 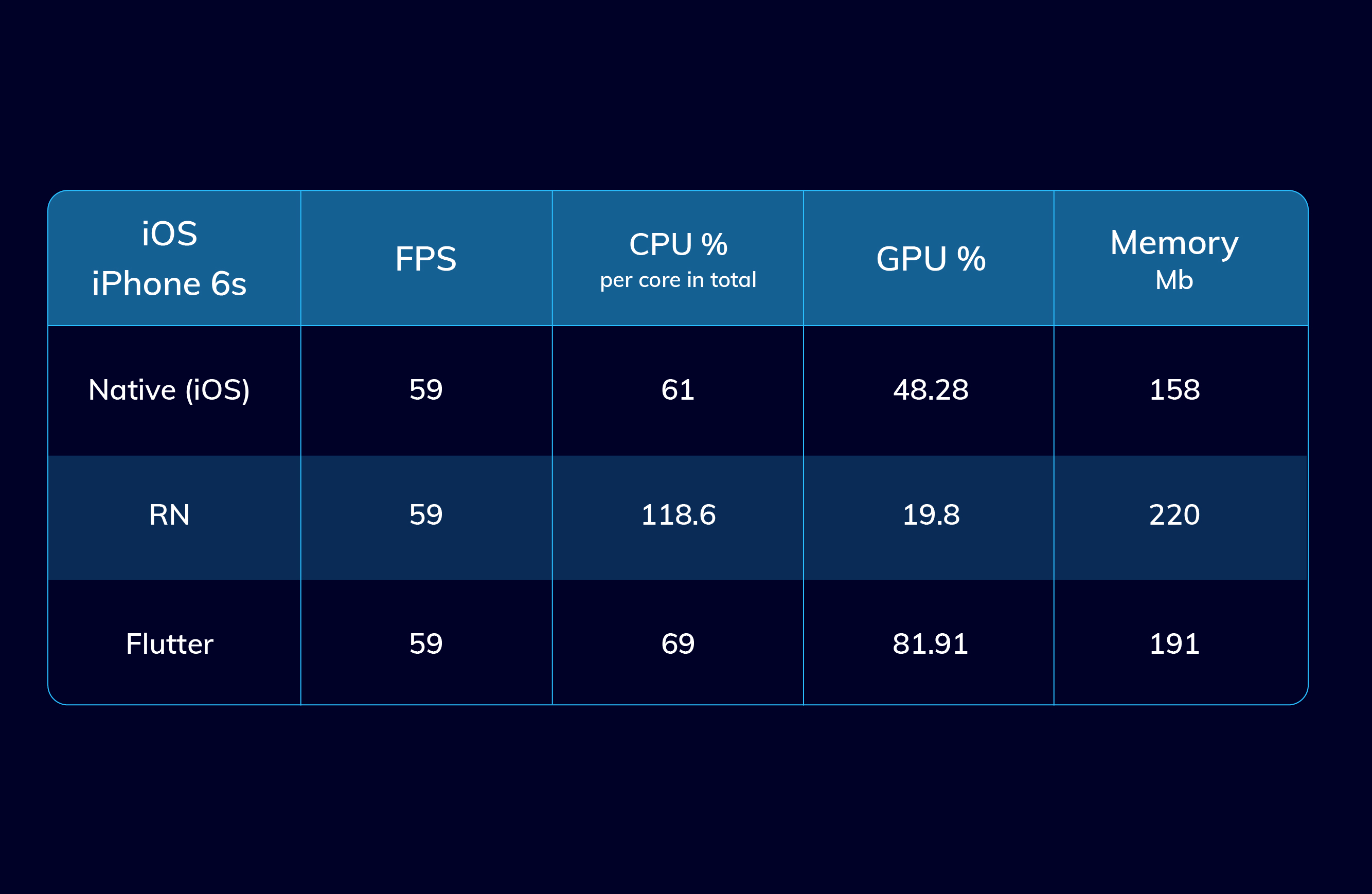 For our testing purposes, we were using an affordable Xiaomi Redmi Note 5 and an iPad Mini 3 (released in 2014) and iPhone 6s.

For usual business apps with minor animations and shiny looks, technology does not matter at all. But if you'll do some heavy animations keep in mind that Native has the most performance power to do it. Next, come Flutter and React Native. We would definitely not recommend using React Native in a very CPU heavy operation, while Flutter is a great fit for such tasks from both CPU and Memory standpoint.

The tool you pick depends on your specific product and business case. In case you are looking to develop a single-platform MVP — use native means, but keep in mind that Flutter apps can be built both for mobile, web and desktop environments and it feels like Flutter might become a King of cross-platform development in not too distant future, as even today Flutter created a very decent competition for native development tools, especially if your development budget is not too stretched but you are still looking for the decent performance of yours app.

We face the fact that there might be many factors impacting implementation and benchmarks of each technology, and many of you who might be true experts of a specific platform can squeeze much more out of the beloved set of tools. We tried to bring as much transparency into the process as we could by creating a single environment for each app to get tested and a single set of tools to measure the performance, and I hope you liked the result. Yet again our mobile and Flutter teams are happy to receive and carry all the burden of your feedback and suggestions:).