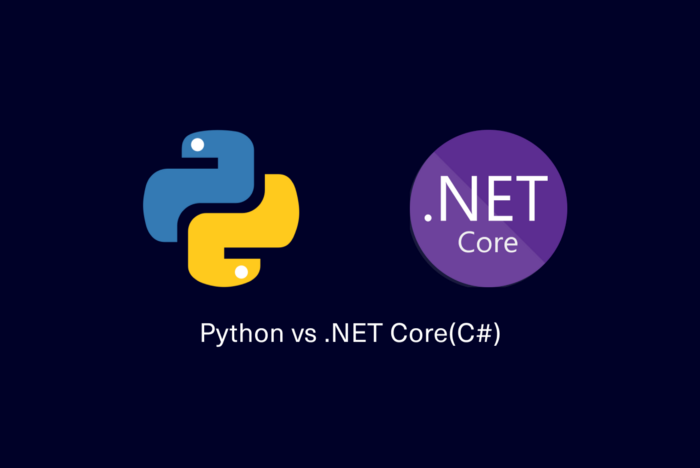 Having a fresh look at a familiar technology is always interesting. Though even more interesting is to compare two powerful technologies that are included in the list of the most popular programming languages of 2020 in multiple charts. What is more, such comparisons are very helpful for business owners and developers who have faced a choice between two or more of the possible options.

Today we’re going to have a look at Python vs .NET Core(C#) differences and similarities, their strong and weak sides. And though some may ask: why these two? Python is a programming language whereas .NET is a framework that can support multiple languages. Well, it’s quite common among .NET developers to switch to Python and vice versa. Both technologies offer fast development and quality performance and have gentle learning curves. Yet, C# is considered to be a direct Python competitor. This makes the choice between the two often difficult and challenging.

C# (C-sharp), developed and maintained by Microsoft, is modern object-oriented, and straightforward programming language. It was developed by Anders Hejlsberg as an alternative to C and C++. Therefore, it possesses some structural similarities with the aforementioned languages. On the other hand, it received a plethora of updated features and is relatively easy to learn. C# is designed for CLI (Common Language Infrastructure) that includes executable code and runtime settings.

Python was developed by a Dutch programmer Guido Van Rossum who was proclaimed “Benevolent dictator for life” until he left the position in 2018. The idea of language development is based on the DRY (Don’t Repeat Yourself) principle and readability. Python is interpreted, dynamically typed, and a high-level language that provides easy debugging and boosts speedy development of application prototypes.

Comparison of C# and Python

C# is a statically typed language. The compiler provides errors for the wrong typescripts, whereas Python has dynamic type-casting. It gives no need for variable declarations. What does it mean for the project development process? Well, C# requires an additional compile step that often isn’t very pleasant for developers and impacts productivity and the amount of time needed for testing and debugging. On the other hand, the compiler also finds errors before they have an impact on the development. When it comes to Python, the process is easier and faster — it runs immediately.

Talking about performance, there is a big difference between C# and Python. Python is an interpreted language, therefore, its speed to a great degree depends on its interpreter (CPython, PyPy, etc). Contrary to Python, C# is a compiled language that requires more time and effort to write code but brings more efficiency in its performance. Furthermore, Common Language Infrastructure Framework also makes C# more speedy and offers better performance than Python has.

C# takes roots from the paradigm of object-oriented programming. If one has background knowledge or experience in Java or strives to develop applications for the Microsoft platform, C# is a perfect choice. While Python doesn’t require the knowledge of so many language constructions as to its syntax. Python developers can learn more in the development process, whereas, C# developers require a basic knowledge of language constructions as classes and functions, while in python it often takes one line of code.

As it has been already mentioned Python is based on DRY (Don’t Repeat Yourself) and readability principle. It aims to produce quality code with a minimum effort. Python has a much simpler syntax in comparison to C#, it also doesn’t require a programmer to finish every line with a semicolon, has a lot of whitespaces, and easy readability.

Both languages were elaborated for general purposes. They are widely used for everything from game development to the Internet of Things. Though, there is an aspect in which they differ a lot — machine learning. Python is an extremely popular choice for machine learning which provides the developers with a lot of tutorials, videos, and offers a vast majority of software choices: Apache Spark, PyTorch, SciPy, and many others. Talking about #C the choice is more limited — ML.NET and older libraries like Accord.NET and bindings for TensorFlow.

As we wrap up this post, we again ask the question: Python vs .NET (#C)? To be honest, it’s challenging to decide which is better. It’s even hard to compare as tools are very different and often serve a different purpose. Both offer great performance, have active communities, a variety of libraries, and are extremely popular in the programming world. Though, if your priority is fast and neat coding, easy learning, a big amount of open-source libraries, and machine learning, we recommend using Python. C# is a better option in the matters of efficiency of performance, lack of inconsistencies in the formatting rules and syntax, and great Microsoft integration.

If you still feel stuck and can’t make a decision, contact inVerita and we’ll guide you through this process of choosing the best stack for your next product.