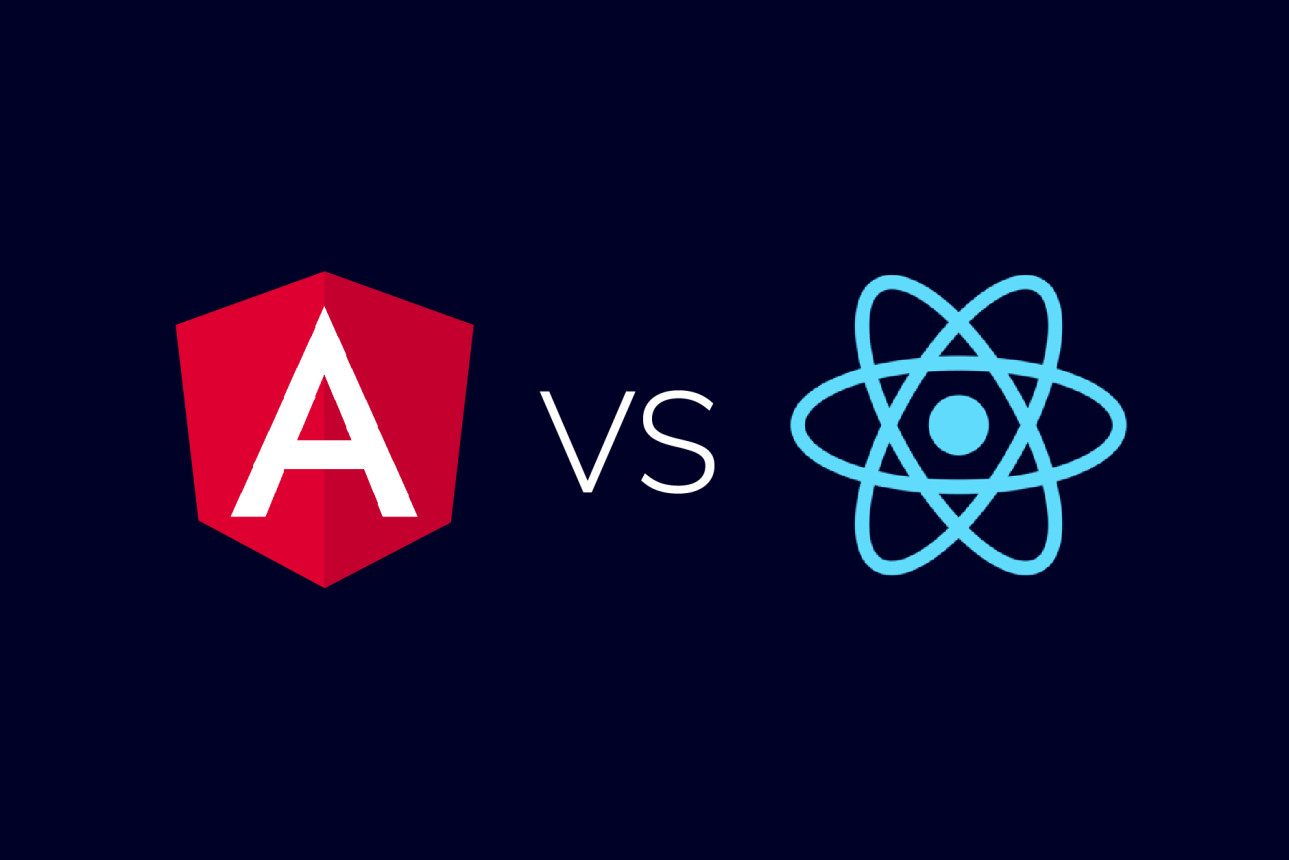 Front-end has been one of the most dynamically evolving directions in nowadays development. That’s why the great variety of tools, libraries, and frameworks elaborated to ease the working process, doesn’t knock our socks off. But that’s also the reason for another problem: which one between them to choose?

Today we will shed light on the most popular JavaScript frameworks for front-end developers, React and Angular.

Angular is a JavaScript framework elaborated by Google and written in TypeScript. The latest updates of Angular were released in August 2019.

React is a JavaScript library for UI development managed by Facebook, updated in August 2019.

Though both frameworks guarantee you easy modification, while concerning the speed of application development, you should take into account the skills of developers and the number of libraries with the functionalities available. React’s architecture is easier than Angular’s but developing an app in Angular is faster than in React.

Angular. Being developed by Microsoft, and influenced by Java and .NET, Typescript features extremely strong typing system able to statically analyze code by using a combination of annotations and type inference, making learning easier for developers who have previously worked with one of these languages.

Mastering Angular is much more time-consuming than mastering React. It’s a complete framework that requires learning associated concepts like MVC and TypeScript. Though, the time spent on learning will definitely be paid back in understanding how the front-end works. In comparison to Angular, React is not a complete framework, and its usage requires the use of third-party libraries. It offers a guide that acquaints you with basics just in one hour. The only thing that might cause difficulty while mastering React is Redux Library, as about 60% of React-built applications use it.

Angular and React take dramatically different approaches to update HTML which affects the performance of an application. 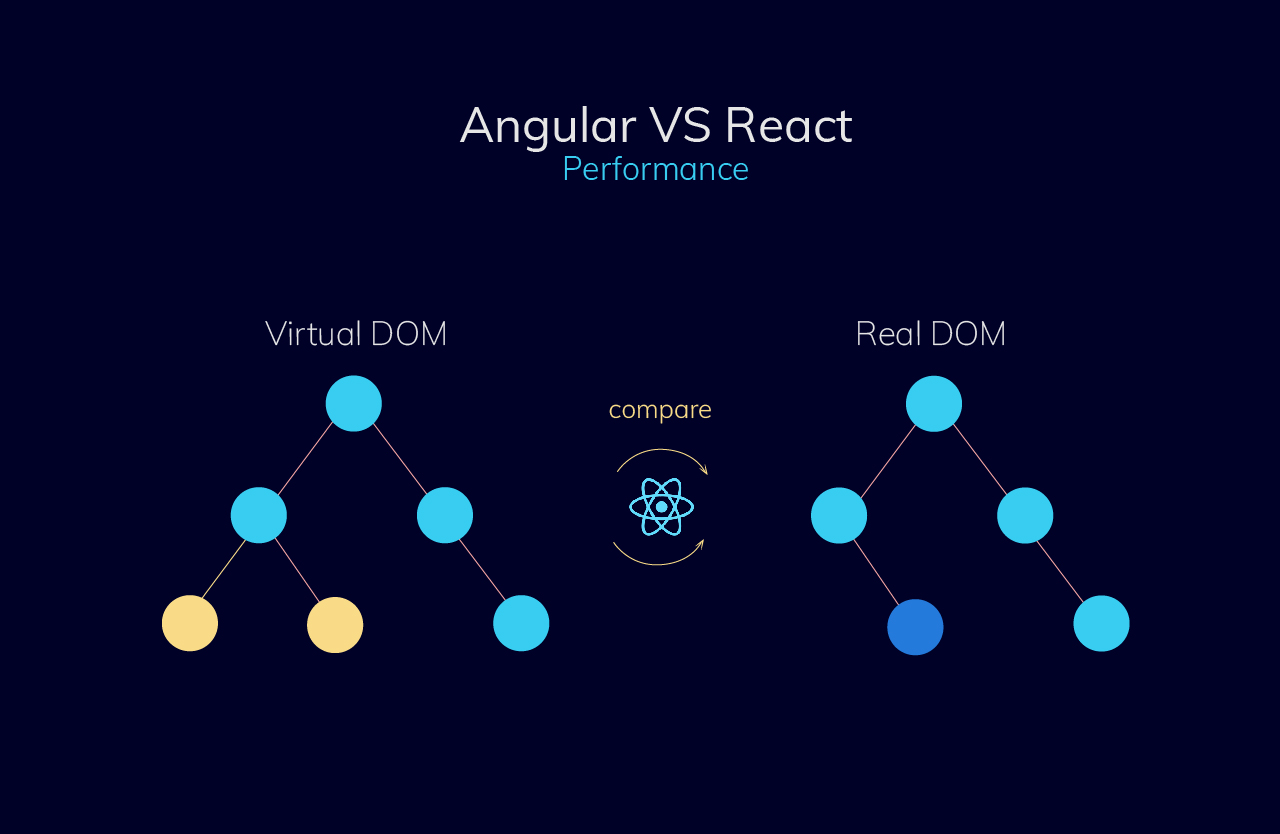 Angular utilizes Regular DOM which uses change detection to find which component needs updates. Even if the changes take place in one element, it updates the whole structure. React uses a Virtual DOM that helps to increase general speed and application’s performance. When one change is done, it updates only specific elements and doesn’t influence the other parts. It’s considered to be faster than Regular DOM.

The structure of Angular is stable and complex formed on three layers: Model, Controller, and View. Reusable Angular components are written in four separate files: a TypeScript, an HTML file, a CSS file and a file for testing.

React’s structure gives complete freedom of choice. Though, at the beginning of each project, you have to design the app structure. React provides only View layer and two others must be added from other libraries. React’s app is based on components directed in functional and class-based ways.

While testing Angular projects, two frameworks Jasmine and Karma can be used and both of them fit very well. Jasmine guarantees human-readable test cases, whereas, Karma allows running the test cases on every browser and platform configured.

React applications are tested through Jest (a test runner), assertion and mocking library. It is often used in combination with Enzyme that adds extra functionality to the test. 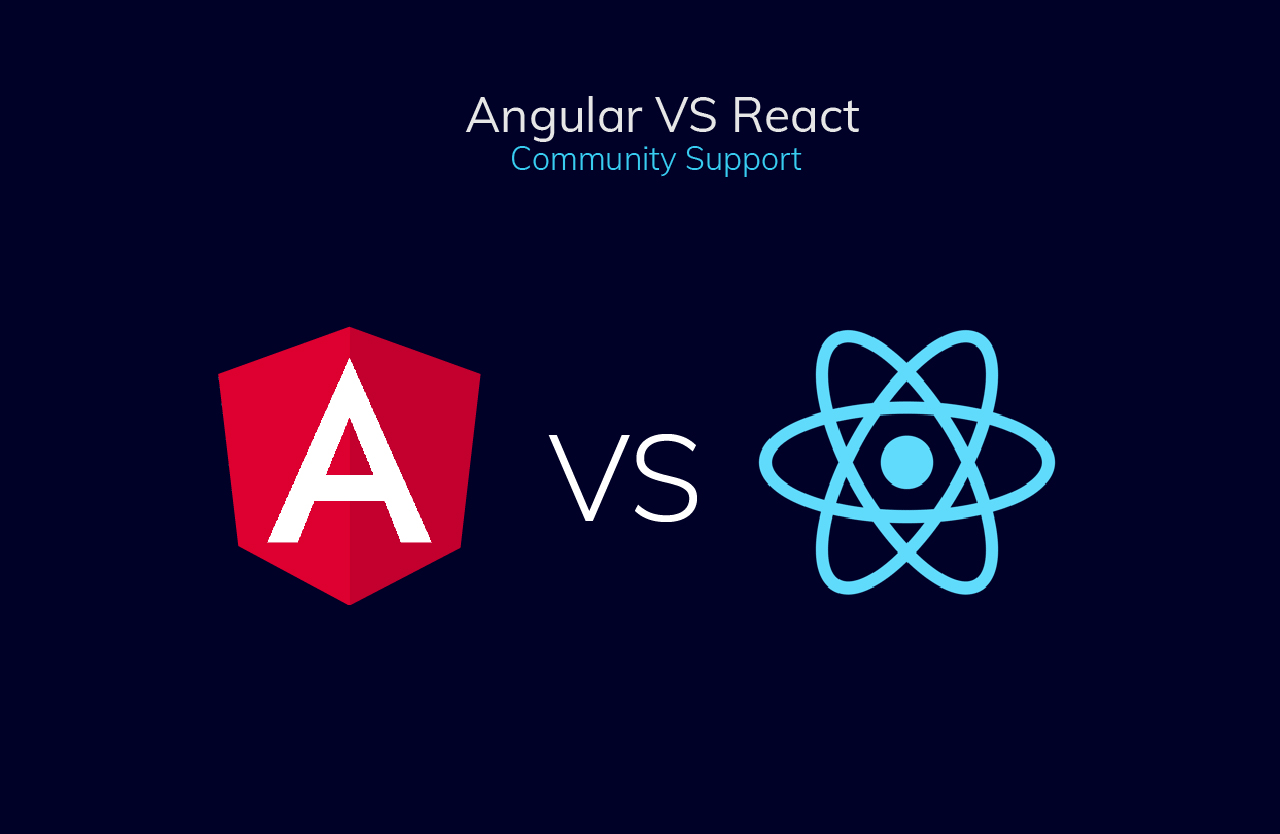 According to the survey held by StackOverflow, 67% of programmers prefer React, whereas, 42% vote for Angular. The tremendous popularity of React can be explained by its usage in such upmarket projects as Instagram and Facebook. Yet, it’s better to try once yourself than to judge someone’s experience.

When to use Angular for app development

Regulating the size of the app and keeping it compact is the best choice, as all the necessary parts of MVP are held in Angular. That allows producing a fully functional Single-page application.

When to use React for an app development

If you are planning to expand the app across multiple operating systems, React is definitely your cup of tea.

So who is the winner in this battle? Each of the frameworks has its benefits and drawbacks, of course, but our message is to pick the one that is easier to master for your team of programmers. And if you lack those, we, at inVerita, are eager to become your solution, no matter which one you choose.