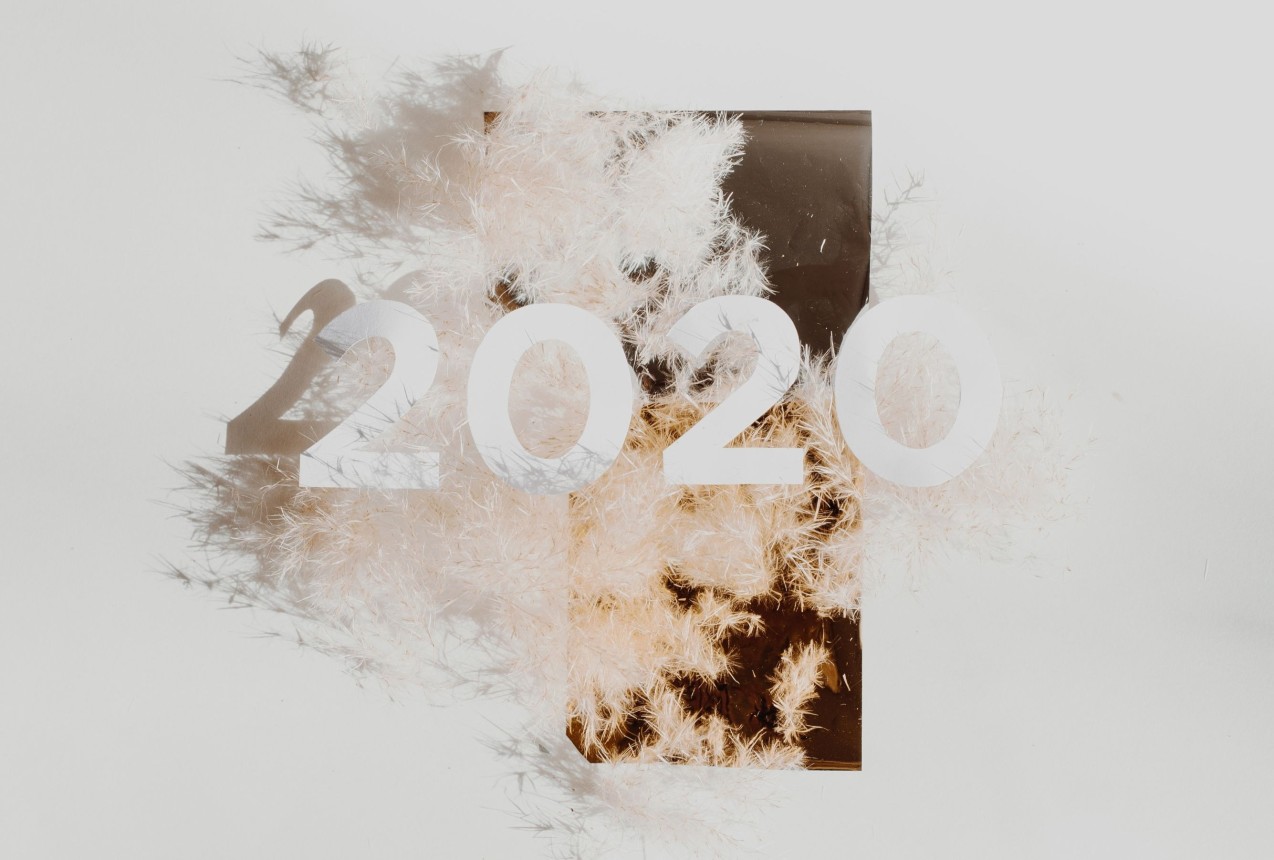 Java and JVM are the programmers’ favorites

Since its development in the mid-’90s, Java has climbed the ranks of the top software development technologies in demand and has been occupying the first place in the list of the most popular programming languages for years. The explanation can be pure and simple “Write once, run everywhere”. Thanks to its high security, many large enterprises have adopted Java, and such leading service providers as Google, Microsoft, Amazon support it for app development. Among such advantages as stability, extremely wide use in Android App Development, automatic memory allocation, and a variety of open-source libraries, Java has one more — a high degree of platform independence due to the JVM feature. Many popular programming languages such as Kotlin, Scala, and Groovy use JVM as their runtime. Though, having no competitors in matters of stability and trust, Java remains on top of software trends in 2020, making developers carefully watch and master every single latest technology in Java programming.

We have already mentioned the stable popularity of Java, but there are many more modern software technologies that are acquiring their popularity. For example, Kotlin. Since Google officially named it a “first-class” language for Android development, the amount of ‘Kotlin’ job positions has significantly grown, meaning that anyone who seeks for an Android-related position should learn it.

Another language that is attaining popularity is a superset of JavaScript — TypeScript. TypeScript is an object-oriented language, prone to fewer errors, and offers support for JavaScript libraries, that’s why its usage increased from 20.8% to 46.7% in the period from 2016 to 2018.

One of the most preferred languages according to Stack Overflow Developer Survey is Rust — an open-source, memory safe, and learning-friendly. Rust community is a group of people who care not just about making it a good set of libraries but about making systems programming easy and safe. That’s why its popularity is not surprising. 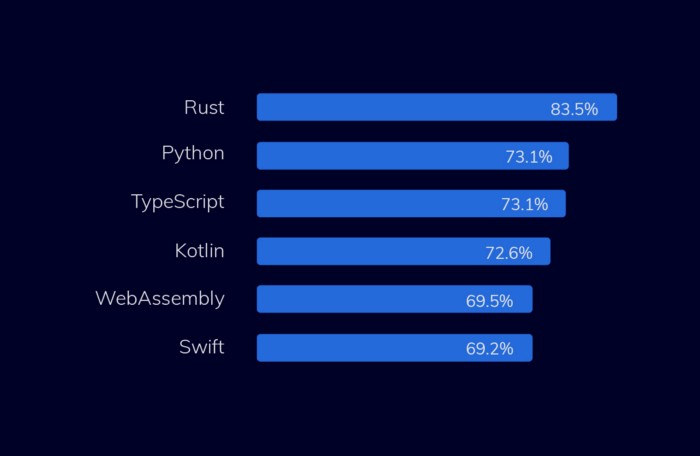 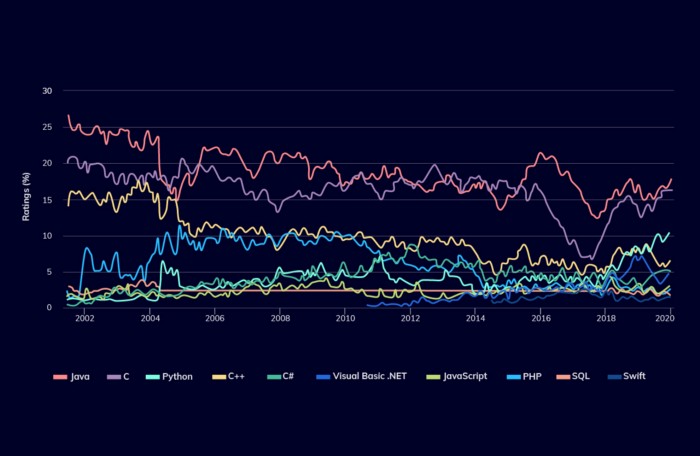 The popularity of programming Language Index (the PYPL index), which analyzes how often language tutorials are searched in Google, gives Python the first place among the most popular languages with the biggest growth (19.0%) in the last 5 years. Being one of the easiest programming languages to learn, Python continues attracting more and more newbies eager to master it, and without any doubt can be named one of the latest trends in IT industry software. According to the TIOBE index, in February 2020, Python has already reached its highest position so far, taking the 3rd place in the chart. This can be explained by the machine-learning boom among the number of developers learning Python. Owning a wide range of software libraries that can be dropped into a code and scaled to large applications, Python gives multiple opportunities for web and desktop app development to arranging system operations.

TIOBE even predicts Python becoming number one among the most trending software development technologies, of course, in the long run.

JavaScript has been the most commonly used programming language for a while. 69.7% of professional developers use JavaScript language according to Stackoverflow Developer Survey Results 2019. There are numerous reasons for this: JavaScript is a flexible and powerful language, consistently implemented by various web browsers, which can be used in front-end and back-end web development, on the client-side and server-side, that allows it to run everywhere from browsers to powerful servers. With a wide variety of framework libraries, it gives developers an opportunity to create complex apps with low overhead. And with a wide variety of latest technologies to learn in 2020, JavaScript frameworks continue dominating.

Because of the great focus on development simplicity and users’ experience, React has overtaken all the front-end competition in popularity. Being elaborated by Facebook, obtaining an effective UI was put as the number one goal and they reached it. But apart from this, many other advantages were implemented: extremely fast updates, usage of virtual DOM that allows a user to make changes without any impact on other parts of the interface, and one-direction data-flow to provide a stable code. 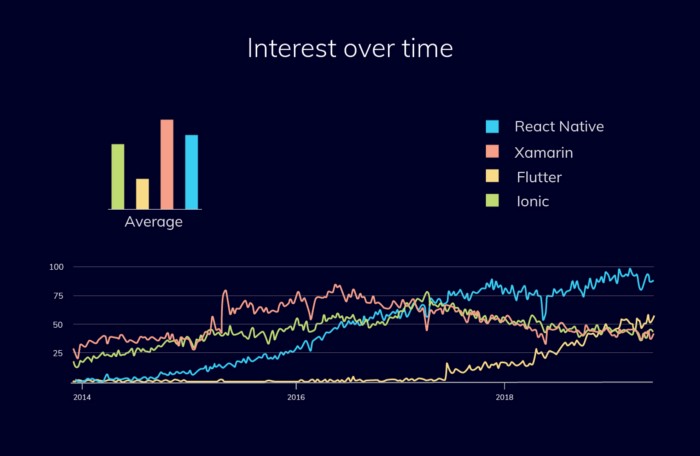 With all these features React strengthens its number one position more in 2020 and adoption of React by companies with wide-known names as Instagram and Netflix approves this.

Native app development is an attractive option for enterprises

Banks, financial institutions, and big enterprises tend to choose native app development over hybrid, and it remains so in 2020. Security is the main driver. The native app provides substantial protection of customers’ data, user-friendly interface, and smooth performance. Enterprises eager to show that they don’t save on their client’s experience will continue opting for native app development.

Cross-platform app development: why React is going to dominate

Developing a cross-platform application might be a great solution in many cases. There are multiple options for cross-platform development like veterans (Ionic and Xamarin) and newbies (React Native and Flutter). React Native was developed by Facebook based on the extremely mature and successful web framework React, which we’ve discussed above. It shares the same base, offers high code reusability, and is used by Facebook for its own mobile application. The popularity of React app development has significantly increased and is predicted to gain more popularity within 2020 considering all the positive changes being constantly implemented into React Ecosystem.

Tensorflow 2.0 will take Artificial Intelligence to the next level

Artificial Intelligence continues to grow and enhance every year becoming a foundation for many technologies in various areas of software development. Possessing a simplified and integrated workflow, eager execution, integration for Swift and IOS, optimization for Android, and many other great features, the deep learning framework TensorFlow, elaborated by Google is predicted to become a world leader in deep learning and artificial neural nets in 2020.

Real-time data processing framework Flink is gaining popularity gratefully for its ability to prevent the blocking of TCP channels, minimization of data transfer, reducing garbage collection, and space-efficient storage of data. Flink is considered to be the most powerful real-time data processing system nowadays and will definitely keep its position in the next few years.

Spark has taken the place of Hadoop in the world of batch Processing. And now is thought to be the most popular open-source project on the planet, with more than 1,000 contributors from more than 250 organizations. With the ability to run anywhere, Spark offers a wide range of specialized processing engines (SQL engine, a real-time streaming analytics engine, a machine learning library, and a graph database) which makes it one of the current trending technologies in software development.